Part 1: My Mom is Going to Die One Day

She’s gone through a lot of rough times, and I haven’t always been the best son.

Why do we always neglect the people we care about the most? For this step, we picked one special person in our lives who we commonly neglect and did something nice for them. This was a pretty easy choice for me: my mom.

I don’t mean to be crass, but my mom is going to die one day. And if you’re lucky enough to still have your mother around, she’s going to die, too. These women, who kept us alive as little kids and gave us so much of their time, are probably going to die before us. It’s a fact—a fact that I unfortunately don’t factor in my thought process enough when I’m busy. I often fail to make enough time to visit or even call my own mother. She’s gone through a lot of rough times, and I haven’t always been the best son. I’ve checked out for stretches of my life, I haven’t invited her to New York in years, and I’ve just been very selfish at times. I often feel guilty about this. Then, I see insightful infographics about how little time we have left with our family, and I watch very touching commercials about how much we neglect them, and I feel even more guilty.

For a while, when I was really little, it was just my mother and me. She had me when she was 22, on the east side of Cleveland. She didn’t graduate high school, and I’ve been told she was on welfare while working at a gas station when I was a baby. For the next couple years, we rented the third floor of a duplex house. As I became a teenager, my mother and I had a somewhat hot and cold relationship because of my behavior. Whether I was breaking the neighbor’s window with a football, getting caught for stealing baseball cards from the local store, having massive parties at our house, or getting suspended from high school for smoking weed, I often acted out as a teenager. I always had displaced anger about not knowing my dad, about my mother’s divorce from my stepdad, about not having the kind of “perfect” life some of my friend’s seem to have.

In hindsight, I recognize how lucky I was to have someone as patient as my mom around. I didn’t fully see all that my mom did for me until later. My mother taught me how to love and respect people, which is why I have so many meaningful and lasting friendships. When I was 21, she was diagnosed with thyroid cancer, and I watched her overcome it. I learned that a person doesn't need money to be strong, she just has to have love and faith.

The truth is, meeting my biological father earlier in this experiment has only made me appreciate my mom more. So then why do I still block her out of my life so much? It’s the weird cycle that happens annually: I always feel I need to keep my worlds separate in order to efficiently run my life. So when I’m busy with work, as I am all year long, I just don’t make enough time to call her. Sometimes we talk once a week, but far too often I let that slide to 2-3 weeks. (We DO text frequently, though.) Then when I slow down, usually around the holidays, I visit her for one or two weeks.

When I’m home, I feel guilty: guilty for not spending enough time with her during the year, guilty for not doing or saying enough, guilty for not showing my gratitude enough, guilty towards myself because I know she won’t be here anymore. Sometimes, I get really emotional about it like I did recently. She was at the Browns football game on a Sunday afternoon and she sent a photo to me. She seemed so happy, and her happiness made me so happy. I can acutely remember the surgeries she went through and the times she’s been in so much pain, and I’m happy she doesn’t have to feel that right now.

So when I told my mom, yet again, that I wouldn’t make it home for Thanksgiving this year, something didn’t feel right. I had a very busy week planned with work meetings and a root canal, so I knew that if I were to come home, it would have to be a very last minute trip. It seemed possible, but as the day before Thanksgiving approached, I told myself it was too late and that I’d see her in a month for Christmas, anyway.

But even though I told my mind that, my body didn’t listen; I popped up wide awake on Thanksgiving morning at 6 AM and decided that I had to go home to my mom in Cleveland for Thanksgiving.

So I woke up at 6 AM, checked the airlines, buses, and rental car places, and realized this wasn’t going to be easy. It was over $750 to fly home, and a bus would take 13 damn hours. If I was going to surprise her that day, I needed to find a rental car ASAP. I made a couple calls, and luckily a few places were open in Manhattan. I took a quick shower, packed, did some push-ups, and rushed to the Avis just up the block from me. I had fun telling the ladies working there what I was up to. I’ll never forget what the one woman said: “Just don’t surprise her when she’s eating turkey because she’ll choke!” By the time I got in the car and left Manhattan it was 9 AM.

I ended up documenting the entire day on my iPhone. Man, I love a good road trip—and luckily for me, it was one of the nicest Thanksgiving weather days I’ve ever seen. It was so much fun eating bad food, blasting my radio, and weaving through the mountains in Pennsylvania for over 8 hours. The only thing I didn’t have was a great Thanksgiving road trip mix! I love making a good road trip mix, and if I had planned this trip then I could have made one, but for the sake of tradition I made one a 150 song mix here.

I drove eight hours to surprise my mom on Thanksgiving and documented it on my iPhone.
Share:
Facebook Twitter
I had a lot of fun during the trip, stopping at rest stops and gas stations along the way asking people to wish my mom a happy Thanksgiving on camera. By the time I got into Cleveland, it was close to 5:30 PM. My family was having Thanksgiving at my grandparents’ condo apartment complex, so I coordinated with my step-father to let me in when I got there and parked. But what happened next was a complete buzzkill. As my step-dad and I were going up the elevator to surprise her, the fire alarm in the entire building started going off! We got off and ran up the stairs. As all kinds of people in the building were running down the stairs, I saw my mother and my family literally coming down the stairs. My surprise was still a surprise, but my surprise couldn’t really compete against a fire alarm. 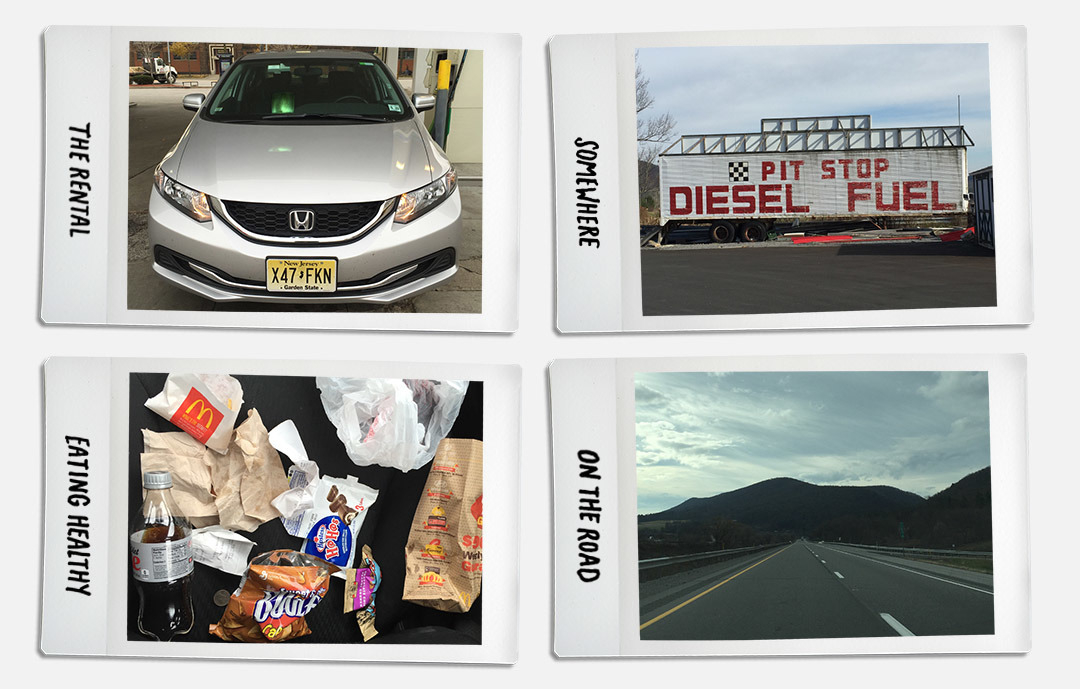 Anyway, it was all worth it to see my mom so happy and excited and surprised.

Part 3: Home Reminds Me Who I Am

People I’ve known my entire life have helped, supported, and encouraged me both emotionally and fiscally, but I always seem to forget. 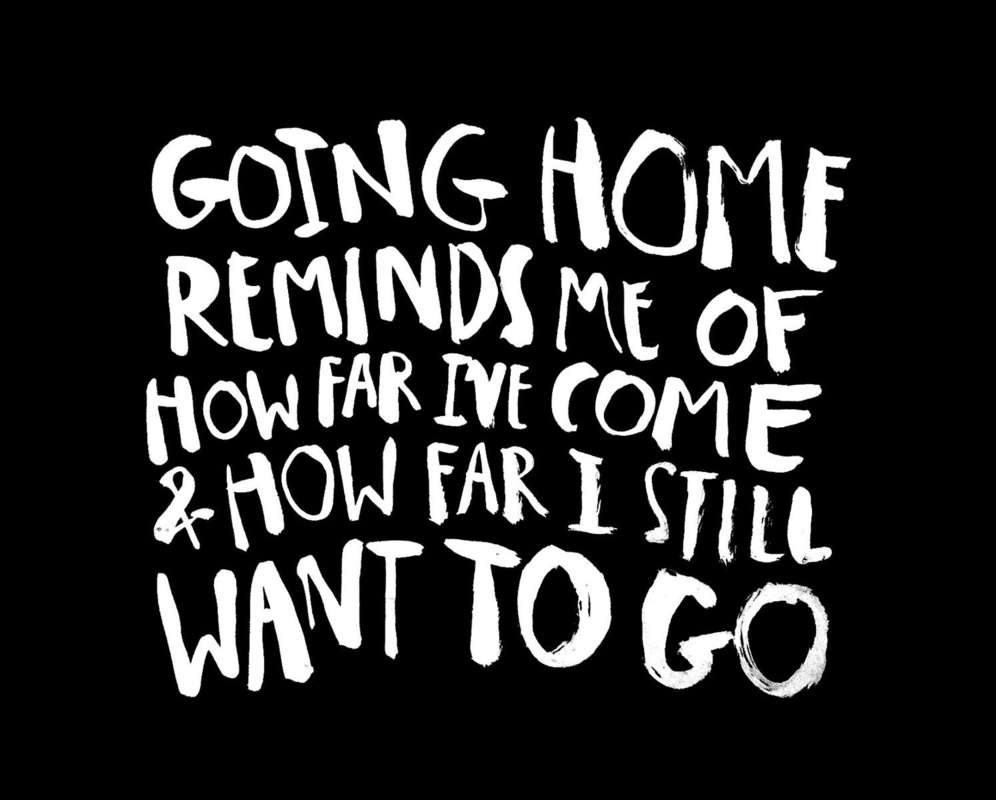 All I could think about this whole weekend is that the opportunity to do good is always around me. People I’ve known my entire life have helped, supported, and encouraged me both emotionally and fiscally, but I always seems to forget. I’m so fucking self-centered compared to my mom. Her entire life was about me and my brothers. She made sure we always had a good Christmas. She made sure we had good birthdays. She made sure we had decent clothes. I remember when I was 14, we thought we were going to lose our new house when she was getting a divorce from my step-dad. We were worried that we might have to move back to our old neighborhood. I was so scared, but she promised me that we’d stay at the new house. She promised me she wouldn’t let us lose it, and she didn’t. My God, if I had been in her shoes, I don’t know what I would have done.

This experiment keeps making me question my motives and my habits and my points of view. I guess that's why we're doing this, but at times it's very difficult. I come home and people are working hard. People don’t have the luxury to do social experiments. People have families and crazy bills and they can’t just rent a car on a whim and drive 400 miles. On one hand, they’re proud of me, and on the other hand, they think I’ve gotten soft, that I’ve lost touch, that I’ve forgotten where I come from. I heard it again when I was home this time for a couple days. I get defensive, and then later I wonder if they’re right. I thought about this a lot on the plane ride back to NYC. 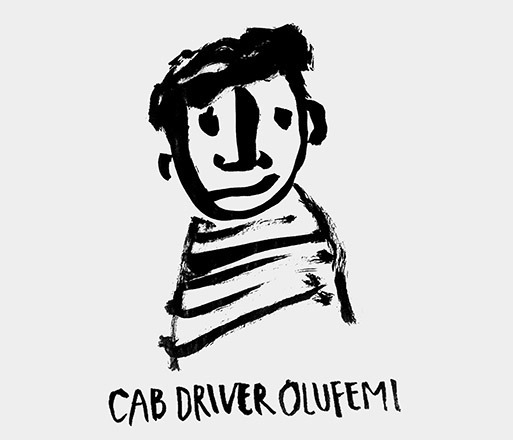 On my way back to my apartment from JFK, I began chatting up the cab driver as I usually do. I always find NYC cab drivers to be some of the most interesting people I meet in life. Anyway, this particular cab driver’s name was Olufemi. We talked about a lot of stuff including his upbringing in West Africa and what it was like to move to the USA over 20 years ago. We also talked about his little daughter, and legacies families leave each other. When I ask Olufemi if he ever went home to surprise his mother in West Africa before, I was shocked by what he said. He started tearing up and he told me his biggest regret in his life was not taking the time to go home and see her. He always said to himself, “I’ll do it next year, I’ll do it next year.” Finally, it was too late, and there was no next year because she died four years ago of cancer. He said his interest in life was lost when she died, and he ended up quitting medical school. That’s when he started driving a cab. He says he still can’t stop thinking about her, and how gracious she was, how much she supported him. He named his new baby girl, Safula, after her. He encouraged me to not do what he did, to see my mother as much as possible, to always make time.

Part 4: Make Your Own Step

We'd love for you to participate in this 12-step journey with us. This step is about doing something kind for the special people in our lives we usually neglect. Find that person in your life and do something thoughtful for them. Comment below or tag #12kindsofkindness on social media and let us know your stories. We'd love to hear them!