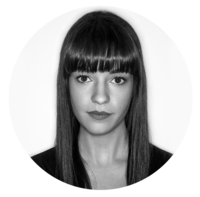 Step 07: Kill Them With Kindness

Part 1: Some People Hate Me

I’ve often been asked in interviews about whether I’ve faced particular difficulties as a woman, getting to the stage I’m at in my career. When I think about it, early on, I didn’t face too much explicit adversity based on my gender. But in the last few years, since reaching a certain level of success and recognition in my field and on the web, the amount of hate mail, jealous remarks, and outright sexism I’ve experienced has multiplied exponentially.
At first this didn’t surprise me. I’m not naive; I knew very well I’d be met with criticism after publishing creative works that were emotionally and sometimes physically revealing. What did come as a surprise was when I began to notice a pattern among the people making mean, negative comments about me: a very large percentage are women.
People have a right to dislike my work, and me. I am well aware that it’s impossible to please everyone, and I refuse to let a few haters limit the kind of work I want to make.
So I’m generally accepting of criticism, and I can even laugh about it most times. Does it hurt when I read mean tweets? If a mean tweet or message reaches me on a really rough day, it can make me insecure, but most of the time I am able to brush off this negativity quite quickly. I mean, sometimes these comments are quite comical:

However, others are not so easy to ignore:

These kind of comments don't hurt me. I know too well the years of extremely hard work, persistence, risk-taking, and hard decisions that got me to my position today. But these comments disappoint me because of this blatant sexism, all too often perpetuated by other women in the industry. It’s not just faceless Twitter trolls spewing this sexist hate: Many friends in the industry have told me about how other women designers spread misogynistic rumors about me. I was talking to a friend about it the other day, who pointed me to this girl, who wrote about me here.

While we’ve made huge strides in the last few generations, the statistics are still staggering: only 3% of women in the creative industry are creative directors or in leadership positions. It’s the same across all industries: only 5% of CEOs are female. While there are clearly many reasons for this, the fact that we are still focusing on women’s appearances instead of our talents or merits is obviously not helping. If we’re all being sexist—even women ourselves—how can we hope to end these ridiculous, insulting stereotypes?

My worry is that in diminishing women's accomplishments, especially through social media, sexist insults discourage and intimidate young women who dream of going after leadership positions, or who want to create work that is not in line with the expectations of their industry. I can’t tell you the number of times young designers have told me how much they admire the risks I’ve taken in my work, but how they would never do it themselves out of fear of the criticism.
There is one particular woman in the design world who has made many negative comments about me. While her comments are representative of many of the negative things I’ve heard other women say, hers have always bugged me in particular, perhaps because I like her work.

The task of emailing this woman who has hated on me publicly was not something I looked forward to. I must have moved it to the bottom of my to-do list ten times before I finally worked up the courage to write her.

I decided it was best to leave out the part about wanting to meet her to talk about some difficult subjects. I figured I could do that in person. As this experiment is about being kind, I figured I should approach her more gently, and not make her feel attacked right away. 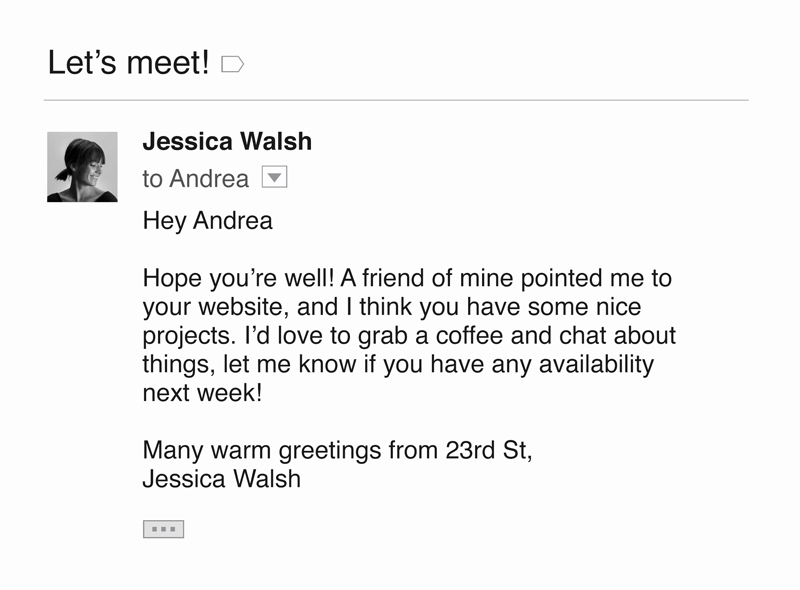 The next few hours were a waiting game. All kinds of illogical thoughts crossed my mind: Does she know what I am up to? What if she tweets my email? I must have clicked “refresh” 500 times that day on my inbox. Then I received a response. 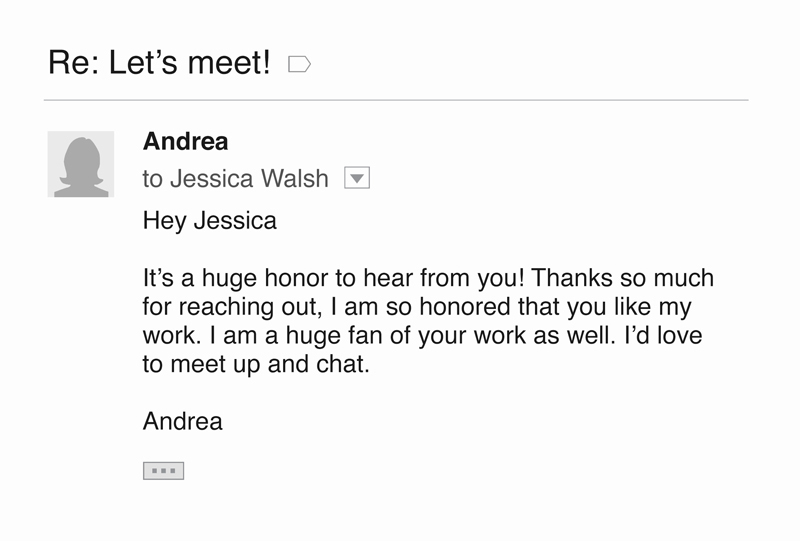 Wait, what? Is the girl who has tweeted such mean, hateful remarks suddenly telling me she loves my work? I quickly opened a browser tab and went through her Twitter. All of the negative things she wrote about me were gone. She must have deleted them.

So, what is going on here? Does she think this might be a business opportunity and she wants to get rid of evidence of her Twitter trolling? Or does she actually like me? Were her tweets a sign of jealousy?

Curious to find out, I met up with her for drinks the next day.

Immediately upon meeting Andrea, it was clear she had no idea that I knew what she had tweeted. She also seemed to genuinely like my work, which was surprising. She talked about projects she liked that I've done, asked numerous questions about my career, and even referenced an interview of mine that she read. I was pretty shocked, I really didn't expect her to say all these things after what she tweeted.

It made me think of an article I read about Twitter haters, and how many of them are actually just admirers looking for attention. I wonder if this was her? I’ve done research about the psychology behind this, and found numerous psychologists who attribute this kind of bullying a result of the “us-versus-them” tribalism that we acquired from our reptilian brains through evolution. This kind of competitiveness stems from insecurity and jealousy: emotions which proved useful as primitive creatures for self-preservation and reproduction.

There have been some research into why women are so critical of each other. For further reading: New York Times CNN ..  Maybe some women are competitive and unsupportive of each other unconsciously because our chances of success in the industry are so much slimmer than our male counterparts’. But if we could channel this competitiveness inwards and challenge ourselves to progress as human beings, versus spending energy judging and diminishing the accomplishments of others, imagine how much more talent would be cultivated.

Leading up to my meeting with Andrea, I wanted to talk about all these things and confront her about her Twitter comments. But I took a step back, and realized that this step is about being kind to those who dislike us, and I knew bringing it up in person could hurt her or make her feel uncomfortable. I also felt bad, I suppose it was dishonest of myself for not disclosing the real reason I reached out to her. It was clear this girl didn’t actually hate me, and my kindness towards her seemed to eliminate any anger she once had. I lost an enemy that day, and maybe even gained a future collaborator, as I do really like her work.

I emailed her afterwards to let her know the real reason I reached out, and asked her if I could write about the experience. She said she was okay with it if I changed her name. Now, it seemed we were both being nice to each other.

Thinking about all this left me with a huge desire to help promote young female talent. To mentor and champion other women’s work as much as I can. I’m often approached to do mentorships or independent studies with women, but I frequently decline due to a lack of time. But let’s be honest, while it’s easy to use the “busy” card, we all seem to make time for what’s important to us in life. I can’t rely on these issues to change overnight, but what I can do is make an effort myself.

So, I've decided to start a monthly conversation series with other women in the industry. I'll host small groups where we'll drink wine, and talk casually on a variety of topics related to life, business, and creativity. Each event will have a different theme such as portfolio reviews, social media & business, or creative labels. If you're a student or designer and want to join, RSVP here: Ladies, Wine & a bit of Design

* The woman's name was changed in this article to protect her identity.

Part 4: Make Your Own Steps

We’d love for you to participate in this 12-step journey with us. Step seven is all about understanding or doing something kind for your “enemies.” Attempting to talk to them, or doing something kind, can break the cycle. Comment below or tag #12kindsofkindness on social media and let us know your stories. We'd love to hear them!