Psychologists say that in order to be more compassionate, we must learn to expand our kindness to strangers outside of our direct circles — strangers who will do nothing for us in return. With that in mind, we performed random acts of kindness for people on the streets and left wallets all over NYC that were filled with money and a little note asking the recipient to do one kind thing with it (see Jessie’s side for this).

My first thought when we came up with the idea was, “This is cheesy as hell!” I just didn't think that anyone in New York would let us be nice to them. My second thought was of that old Kevin Spacey movie, Pay It Forward, that came out back in 2000. That movie was actually the first time I had heard the cliché phrase. I didn't love the movie that much, but it obviously had a good message. My third thought was to check out the movie's Wikipedia page, where I learned that Benjamin Franklin coined the phrase and said, “This is a trick of mine for doing a deal of good with a little money.”

So, why would performing little random acts of kindness all over NYC have any effect?

Before I talk about our experience, I’m going to share a little story. Recently, I was watching one of my favorite TV shows, CBS Sunday Morning. They profiled a nine-year-old kid named Ben Pierce, from Denton, Texas, who is slowly losing his eye sight from a rare condition. However, Ben is on a mission. His parents decided that Ben needed to stock up on as many visions and sights and memories as possible, so they told him to make a list of everything he wanted to see before he went blind. They call it a “Before-I-Go-Blind” list, and they have been slowly crossing things off. Some of the things on the list are more expected, like seeing the Grand Canyon in person or seeing Van Gogh paintings in museums, but there have been some really weird things you wouldn't necessarily think of, too. For instance, he wants to see the inside of a water tower, or see chalk on a microscope. How awesome is that?

This experiment has already been making me feel more and more emotional, and as I was watching this show I just started bawling.

Anyway, this experiment has already been making me feel more and more emotional, and as I was watching this show I just started bawling. I mean, how amazing is this kid? His family members were so enthusiastic about it, too. They’re on such a mission to accomplish all of this before he goes blind. I was bawling because it made me think about how much stuff I take for granted in my own life: my family, my friends, my work, my privileges. I was bawling because I’m not that enthusiastic about a quarter of the stuff I do in my own life. I was bawling because I admired this kid’s tenacity and positive attitude even though he’s going to be blind soon. I was bawling because I was thinking about my own mother, and my own biological father, and everything that has happened in the previous steps of this experiment. I was bawling because I was thinking about how I do want kids one day and how I don’t know how I would handle a situation like Ben's.
I told you I was emotional.
Anyway, we went out on the streets today and did anonymous acts of kindness for all kinds of people in NYC. I honestly can’t remember the last time I did something nice for someone I didn’t know. Sure, I hold doors open for people, and yeah, I tip waiters well and I’m happy to tell someone they have cool shoes, but I damn sure don’t do much more than that. But today we came across many people that we were kind to: we gave free Metro card swipes for people as they were entering the subway, we bought coffee and doughnuts for people, we left nice notes on chained bikes and on parked cars, and we gave a little girl a free stuffed bear. We gave a box of amazing macarons to a stranger on the street, we bought groceries for an elderly lady, we gave balloons to kids, we bought shots for everyone in a random bar, we thanked a cop for all he does, and so much more.

Society is like a jazz swing band: There’s a mutual and subtle dialogue going on, that sets a beautiful tableau for everyone to participate in. 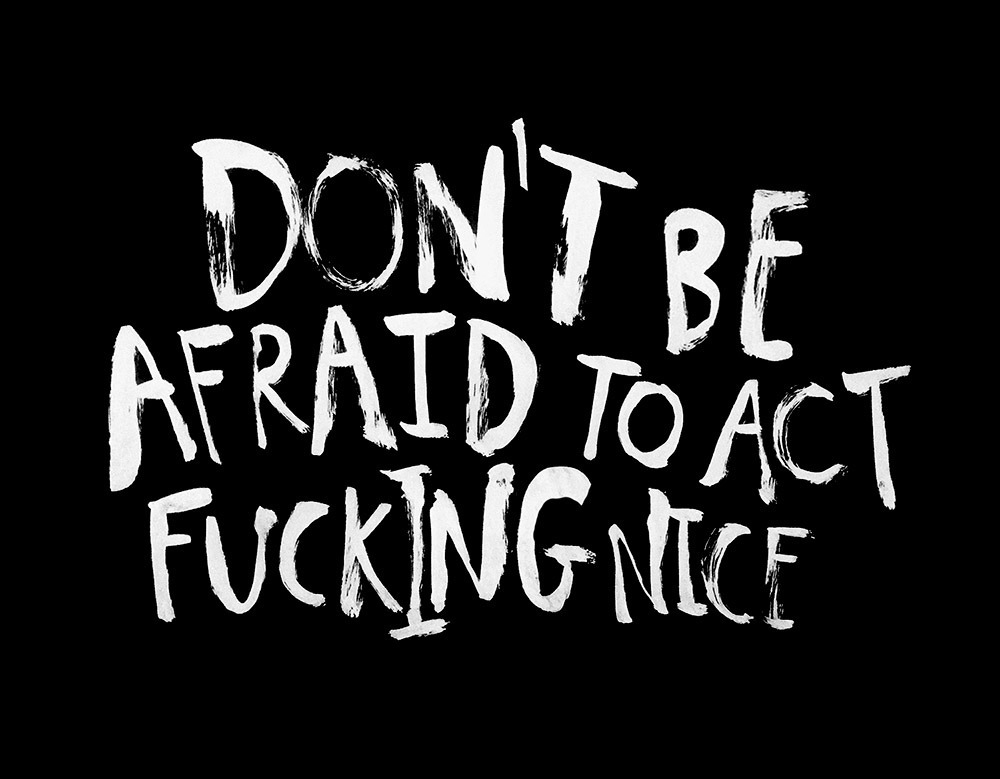 Talking to so many people in the city in one day really leaves a mark on you. It allows you to slowly tap into the pulse of humanity a bit more. Society is kind of like a jazz swing band: There’s a mutual and subtle dialogue going on, that sets a beautiful tableau for everyone to participate in. I’ve been a massive jazz fan for a while, mainly because jazz has the pulse of humanity. The music can go any which way. It’s an organic organization and dialogue of musicians. While jazz grew out of the Civil War in New Orleans, its role in the fabric of American history became very important, both socioeconomically and culturally, and by the early 1900s it was linking white middle and upper classes to black entertainers. Jazz represents improvisation. Jazz represents expression. Jazz represents democracy. Jazz represents rebellion. Jazz represents everything America is.
Sometimes I feel like a swing band when Jessie and I are creating these experiments. We are a product of this generation. We are a question trying to find some answers, or better yet, trying to find more questions. We are TMI. We are the Internet. We are American. And we don’t have much to model ourselves against, we’re just trying to push our own capacity. We’re just trying to see our behaviors clearly, no matter how ugly they might be. If we can get in front of our own behaviors and fears and motivations, then maybe we can do something about it. It’s about improvising, it’s about playing to your own drum, and it’s about following a path of the unknown.

When we do these steps, it can sometimes feel forced or contrived. It’s contrived because it is an experiment, and nothing is necessarily “natural” about an experiment. It’s contrived because we’re filming it. It’s contrived because we’re doing these kind things as a prompt, as a way to find out what will happen. But what I find really interesting is the way I feel afterwards — how we feel the night after, the day after, and the entire following week. I feel so much more aware and patient with the people in my life, with everything that is going on around me. I feel incredibly attuned to what is going on around me, with the people who are sharing this city with me after doing this all day. Whether in the subway, walking down the street, buying a coffee, hailing a cab, or sharing a meal with a friend, I just feel more engaged. I feel engaged at times when I’d usually feel apathetic or aloof. It’s wonderful. And it makes me feel really hopeful. But it also makes me wonder why I can’t always be like this. 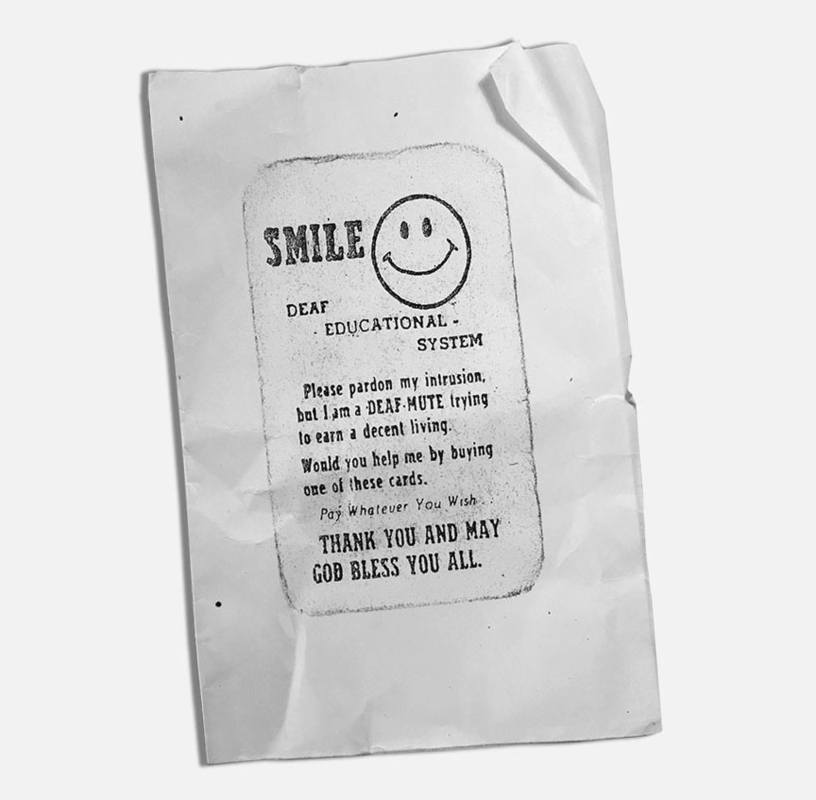 As I was walking home today after doing this step, a guy stopped me on the street who looked homeless. Normally, I would be much more apathetic and try not to make eye contact. But today I was in that pulse that I talked about, and so I did the complete opposite and I stopped. He handed me a piece of paper without saying anything. I took the paper, but I didn’t look at it right away. I just stood there and looked at him while he looked at me. He didn’t talk, but he had so much life in his eyes. He seemed happy, and I felt real compassion for him at that moment. Then he started mumbling something, but I couldn’t understand him. I looked at his piece of paper. It said “SMILE” with a big smiley face. Underneath that it read, “Please pardon my intrusion but I am a DEAF MUTE trying to earn a decent living. Would you help me by buying one of these cards? Pay whatever you wish. Thank you and may God bless you all.” After what we had just done all day, this really felt serendipitous. 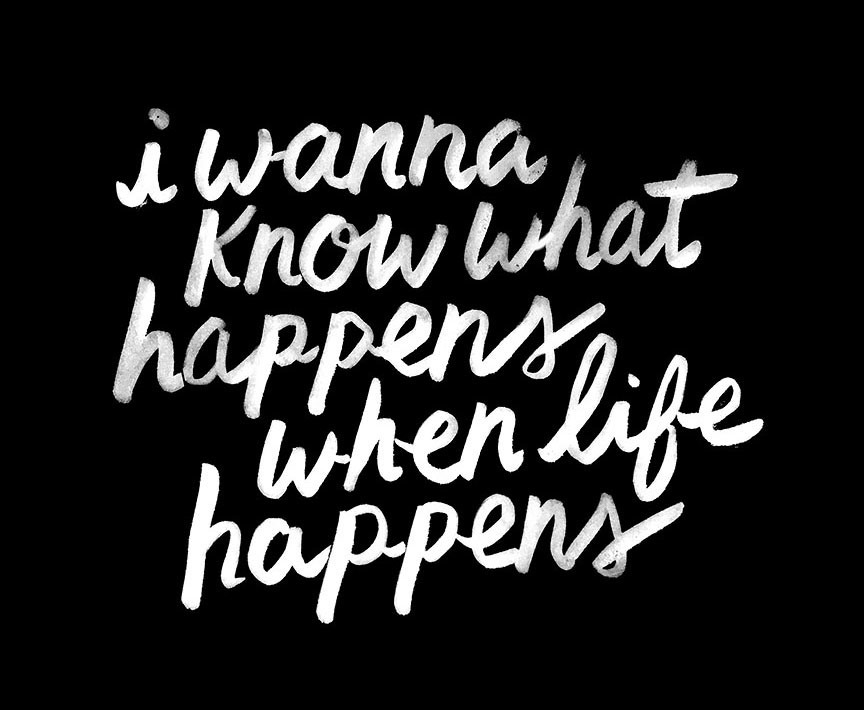 I swear I wanted to give this guy everything I had at that moment. Unfortunately, I had no cash on me. We couldn’t communicate well, but I gestured to him that I would buy him some food with my credit card. There was a sandwich shop down the street so we walked there. He grabbed a sandwich and a Coke. "That’s all?" I asked him if he wanted anything else, but he waved it off. Then he pointed at the cookies and made a gesture for “three.” He wanted three chocolate chip cookies, too. After I bought everything, he patted me on the back about five times. We fist bumped inside the store and then shook hands. As we were walking out, he stopped to gesture at a gorgeous woman who was walking in. He handed her his card, she smiled broadly, he smiled, and she gave him five dollars. This made me smile even more. 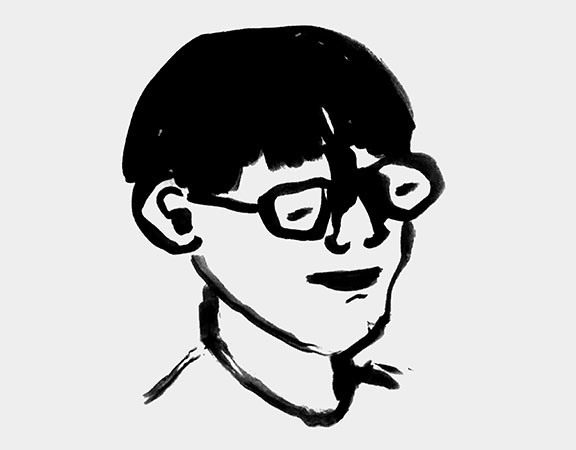 This guy just needs people to be kind to him, so why aren’t enough of us willing to do so? Why the hell are we always so suspicious when someone does something kind for us? Would I have even given him the time of day if it wasn’t for our experiment today?
I think of that kid again, Ben. He’s out there right now trying to gather as many memories and sights as possible, knowing one day soon he’ll live in darkness for the rest of his life. Meanwhile, how many of us with eyes are living in the darkness already? How many of us aren’t living the life we should be living, or doing it all with real life in our eyes? I know I am not.

We'd love for you to participate in this 12-step journey with us. Step 10 is all about paying it forward. Pay for the person's coffee in front of you. Give up your basketball tickets to a friend. Give someone a compliment. Comment below or tag #12kindsofkindness on social media and let us know your stories. We'd love to hear them!