As I walk by them, with the music from my headphones blaring at full volume, I will literally mouth, “I can’t hear you.”
“I don’t care if you want to help me with an important cause, just get the hell out of my way!”
That’s what I say to myself every time someone is trying to get my signature on the streets of New York. Those of us who live in NYC know all about these clipboard-wielding people. They want our help for curing breast cancer or feeding hungry children or ending sexual abuse. And while these are incredibly serious and important issues that I do care deeply about (or so I thought), I somehow don’t care about the strangers who are seemingly trying to guilt me into speaking with them as I’m running late for a meeting. It happens at Union Square. It happens at Washington Square Park. It happens on 23rd Street. It happens just about everywhere.

Yes, I know, this is a complete contradiction, because they are (allegedly) helping people. Whether or not they’re doing it out of pure altruism or because they need a job is another story for another time. That said, beyond whatever individual motive they have, I’d like to think that the folks getting signatures and money for these issues are, in fact, making some kind of difference. So why, then, can I not stand these damn people? I mean, I avoid these people at all costs. 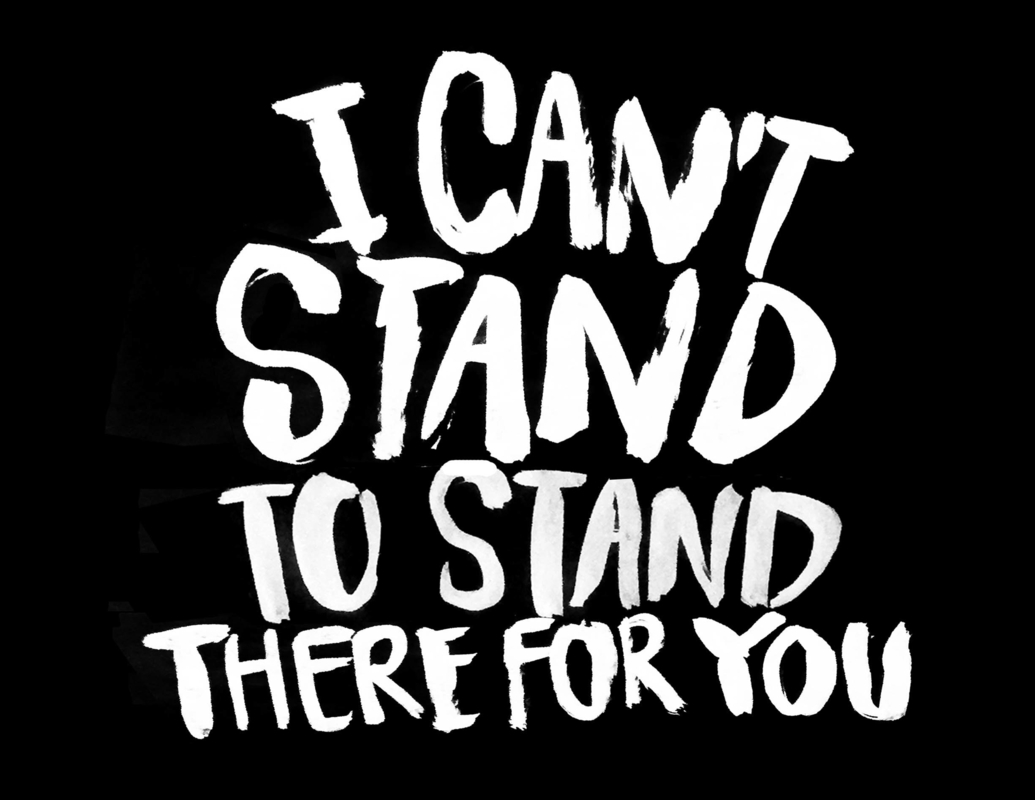 For whatever reason, it tends to be the Children’s International people that get to me most. I know this sounds awful, and I know you’re judging me right now, but I’d love to hear from someone who doesn’t behave the way I do. I’d love to hear from someone who gives them sincere eye contact, a smile, and stops their day every time to listen to these people's soliloquies.

Now, I understand that I may be more animated about it (read: asshole!) than most people, but as I walk by them, with the music from my headphones blaring at full volume, I will literally mouth, “I can’t hear you.” And that’s only if I even get close enough to them. Usually I’m on full lookout, with my radar on 100 so I can spot them from a mile away and avoid the situation altogether by walking on the other side of the road.

Signatures For a Cause I Believe In

I switched roles with the people who annoy me the most: street solicitors.

With all this in mind, I decided to flip the script and put myself in their shoes (I'm clearly taking the whole "walk a mile in their shoes" thing very literally here). I went out for a whole day and tried to get signatures for a cause that I believe in: Big Brothers Big Sisters.

Would trading places allow me to have a little more empathy for these people? Would I suddenly realize the horrors of their job and develop some untold empathy for them? Or maybe I’ll be awesome at their job, and lose even more respect for them?

Who knows, but I wasn't particularly excited about doing it. It's not that I have a big fear of public speaking, and I don’t mind being the center of attention, but I do have a strong fear of rejection and vulnerability —and this sort of job opens a person up to all kinds of opportunities for that pain. The thought of being out there alone, with no life-line, with the possibility of being rejected over and over and over again was terrifying and humiliating! So in many ways, when I think about it, I do admire these people for their audacity. It definitely takes some backbone to do what they do.

It's amazing that by making these contrived parameters for ourselves, I feel emancipated within the community in an entirely different way—a community that I basically just use as a catalyst, without much respect or gratitude, to get from one point to the other.
When I went out to get signatures, I acted as if I was working for Big Brothers Big Sisters, an organization I really believe in. Why? For the last seven years, I’ve been a mentor at Big Brothers for a wonderful young man named Bryon. I grew up without my biological father, and as a teenager, I was in constant search for an identity, always looking to fill the shoes of my missing dad. I eventually found an array of mentors in my life, and while they couldn’t teach me how to shave as a father might have, they gave me the tools I needed to gain confidence in my life. Having these mentors in my life has always been very important to me, and it’s been equally important for me to give back in the same way. It means a great deal to me to be a positive influence for Bryon, and to help guide him through the difficulties he faces.
I stood there, on the harsh streets of New York, trying to get signatures for eight hours straight. This was very difficult, and I faced a lot of resistance out there. You’re constantly being rejected by people, face to face. I did not like that feeling. I could see the faces of people ignoring me, and I knew what they were feeling, and I felt embarrassed by that. I did not like being on the other side of things. People barely looked at me. They literally went out of their way to avoid me, like I usually do. I didn’t feel invisible, as I did in Step 2. I felt disgustingly visible so much so that these people were doing anything they could to avoid me. Later, Jessie had the idea of giving away free money. Shockingly, people wanted nothing to do with that either! Really, you won’t even take free money from us?! Sure, you could be in a rush, but to not even stop for free money says a lot about people’s assumptions.

I absolutely have more respect for the people who do this now. It can’t be easy, no matter how long someone has gotten used to weathering the rejection storm. Every bit of the dirty looks, lies, total avoidance, and blunt rudeness must take something out of you — it did for me. It takes a lot of courage to blindly ask something of someone in a city like NYC. At times, I did feel that courage. And yes, there were two people that signed my form, and it was awesome to talk to them and hear their thoughts. I see how it could be rewarding at times, and how the idea of raising awareness can be beneficial despite assholes like me paying those doing it no mind at all.

After these first three steps, I really feel like I’m responding more to my surroundings and becoming more and more sensitive to the world around me. It's amazing that by making these contrived parameters for ourselves, I feel emancipated within the community in an entirely different way—a community that I basically just use as a catalyst, without much respect or gratitude, to get from one point to the other.

It’s silly, but yesterday a guy needed a MetroCard swipe and I gladly gave it to him without even hesitating. Two days ago, I let someone get in front of me for a cab and I didn’t even put up a fight or a snarl. And a couple days ago, I bought a random guy lunch. Now, I don’t feel as rushed on my way to work in the morning. Just today I was chatting with a teenager in the subway who had this cool guitar. We talked for five minutes and he told me about his friend who made the guitar and then he gave me his card.

If I can remember that all these people are human, just as I am, then it can shock me out of my own internal world. Things slow down. I don’t feel as bothered or rushed or impatient. I don’t feel annoyed. I feel compassionate towards the people, towards their beauty and their suffering, and I feel more compassionate toward myself, too. It’s as though empathy for others is breeding greater empathy for myself; the kindness I’m giving out is coming back to me two-fold.

Our experiences so far have reminded me of a Walt Whitman poem that I have always adored called, “I Sit and Look Out.” Written in 1900, it’s a poem about modern society at the time, with the narrator looking out through the window of life seeing all the suffering of the world. What’s interesting to me is that Whitman is simply documenting what he sees, without judgment, leaving the reader to make their own interpretations and assumptions. It also makes me realize that while our society has clearly made serious progress, in many other ways things are still the same, in terms of the way we treat women, classism, and societal suffering. It makes me realize that I don’t do enough. Shit, I don’t do anything. But how many of us do? 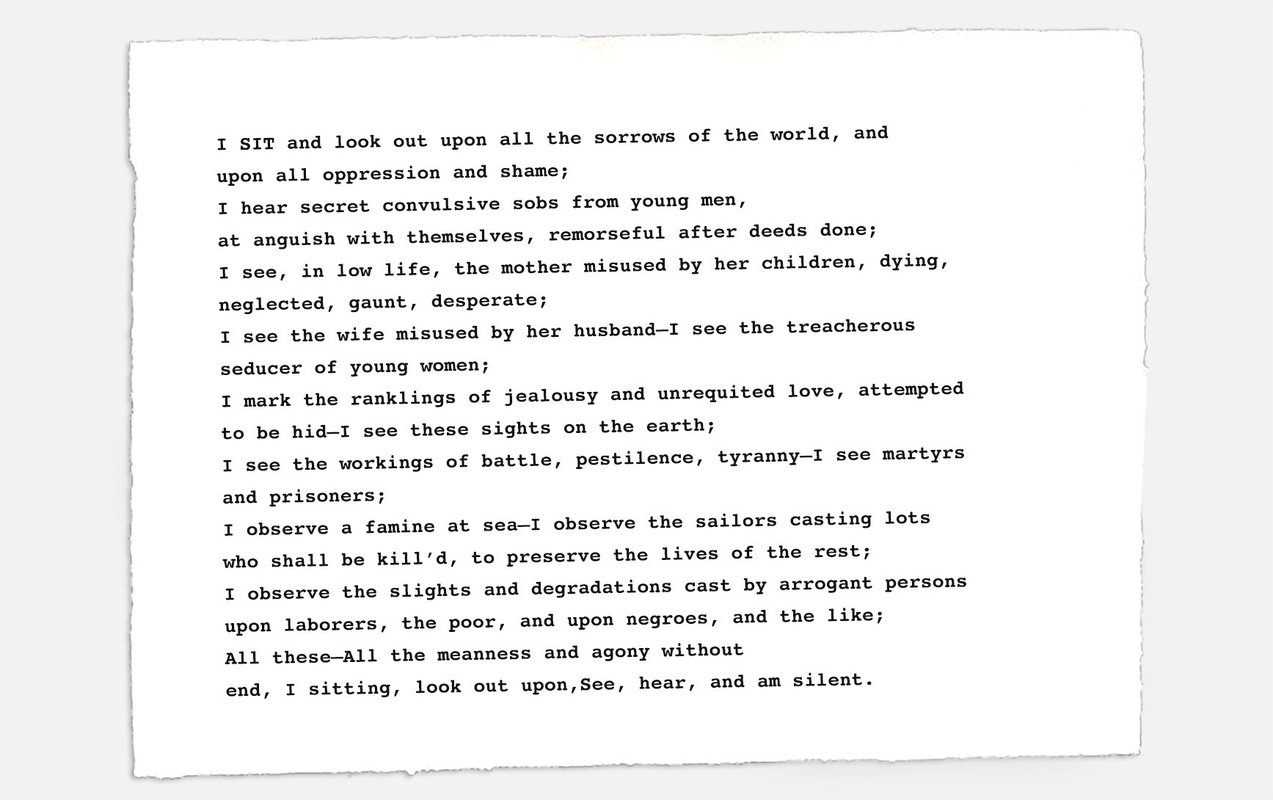 With that being said, if you're interested in being a Big Brother or Sister, or even donating, go to their website. It was two years ago that I heard the best feedback I've ever received about 40 Days. This woman I met at a Christmas party told me that after discovering that I was a mentor a BBBS from the project, it inspired her to join herself. Now she's a mentor for a young girl. I was so incredibly touched by that. It's just another example of why we should all put stuff in the world, and how many different ways we can connect with people.