Part 1: I Live in The Unhappiest Place

People do not smile at other people in New York. Maybe it's because NYC residents are said to be the unhappiest people in the country. Or maybe it's a learned behavior. New York was also voted the rudest city, after all. Maybe it's a side effect of exhaustion: NYC-dwellers are known for being overworked and ambitious, and are always moving at a fast pace; we're probably just too tired to acknowledge — let alone converse with — the thousands of strangers that we pass by each day. Whatever the reason, there's no place that this cold NYC attitude is more evident than on the subways, which inspired us to hang these signs all over the train stations: 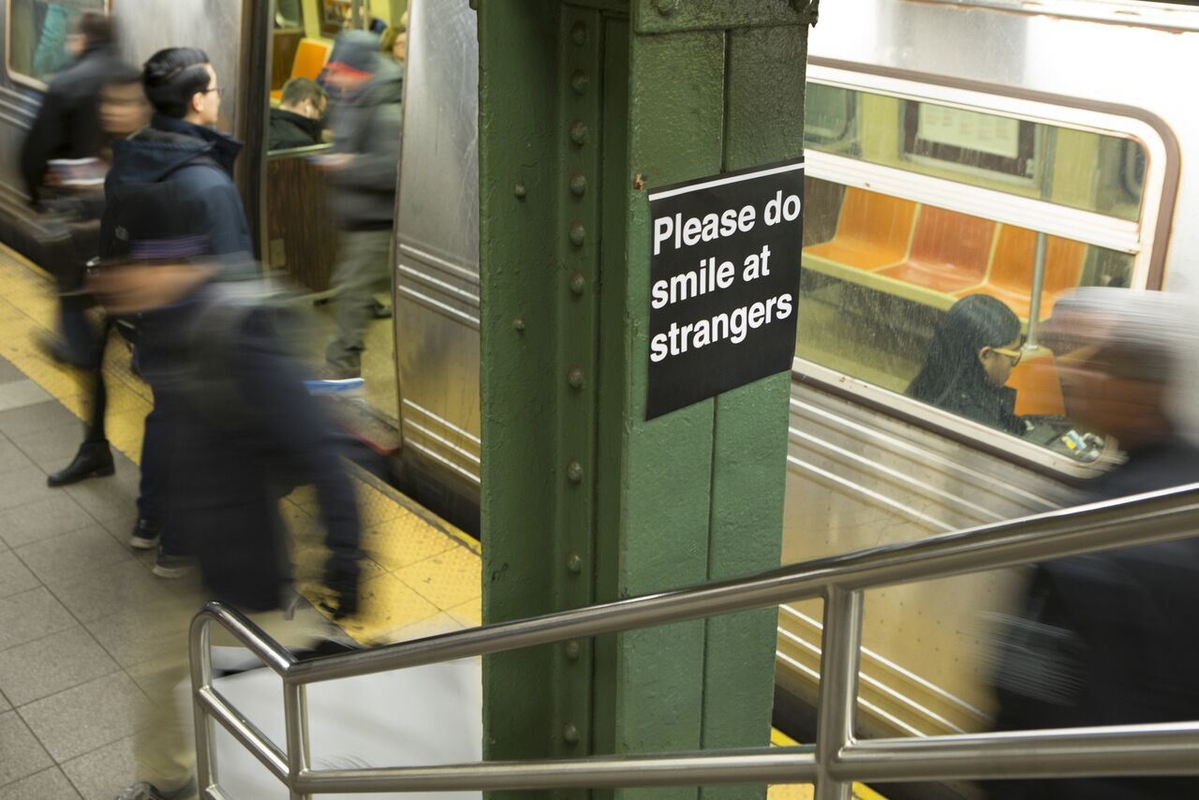 Each morning, I dread starting my day underground, sandwiched in a between dozens of people who wear a lifeless expression I like to call the “subway face.” It’s like a “poker face” but with a bit more exhaustion, depression, and anger.  People can also be downright rude on the subway, especially on the morning commute. I can’t tell you the number of times I’ve seen pregnant ladies or elderly people board the train and no one that's sitting offers their seat to them. I'd like to think we New Yorkers are kind deep down, but the subway strips somehow manage to strip all humanity from us.

But, research has shown that even forcing a smile can make you happier and even decrease stress, so we wanted to give people something to smile about on that dreadful morning commute. For this experiment, Tim & I rounded up 20 of our friends and we all dressed in yellow suits and funny emoji masks and ran around the streets of NYC...

We ran the streets in crazy yellow suits and emoji masks in an attempt to make New Yorkers smile.

This one's weird for me because, living in Indiana, smiling at strangers is pretty routine.

As Midwesterners, when we catch ourselves making eye contact with a stranger by accident, we usually smile unless it's been a particularly rough day. We wave and say "Have a good day!" If it's friends or people we're familiar with, at least a "Hey, how are you?" is requisite. And, so help you, if we run into people we're very friendly with, it'll eat up at least ten minutes of catching up. The pace is a lot slower and I like it better that way; my father grew up in LA, and I'd way rather be in a small town in the Midwest any day.

We have the opposite problem: in the Midwest, we instinctively think of our own unhappiness as an imposition upon others. So when someone asks us "How are you?" or "How's it going?" we instinctively respond "Fine". But this month hasn't been fine for me. Among other things, a close friend of mine passed away. I'm still grieving. I haven't wanted to lie and say that I've been "Fine", but I also haven't wanted to data-dump people about my friend dying.

Instead, these days, I say "Getting better". Sometimes we're not fine and that's OK. I'm not fine, but I'm optimistic that I will be again one day. We can find ways to be honest without imposing our hurt feelings onto others.

People were laughing hysterically at us in these suits! We did make many people smile, and we had a blast doing it. These last weeks of doing random acts of kindness like this have been invigorating. It’s funny because I used to be one to roll my eyes at all this feel-good, do-good stuff, but the more we’ve done these experiments and started making connections with people, the better I feel and the more energized I’ve felt about life again.

I've found myself bouncing out of bed each morning looking forward to all of these weird experiments we've been doing, especially compared to the year prior where I found myself walking through the same routine: wake up, go to work, shut off my brain in the evening by consuming culture, repeat. It's been a while now since the last time I felt this inspired to do out-of-the-ordinary shit and constantly make stuff.

I've felt this feeling before. It's the same feeling I had earlier in my career when working towards something I wanted to accomplish. It's the feeling of purpose and being in a state of creative flow. There is a great book about this state of mind written by Mihaly Csikszentmihalyi called Flow. Some say the goal in life is happiness, but I think it's to feel wide range of emotions, to experience as much as we can of what it means to be human. And there is no better feeling I’ve discovered than this state of flow, and working towards something with purpose. Moments of joy are fleeting, but the satisfaction derived from purpose runs deeper and lasts so much longer.
I’ve noticed that as I've advanced in my career, my sense of purpose has actually gone down, because it's the journey of working towards building something that is invigorating. Once I had achieved certain things I had wanted career-wise, I was surprised at how empty I felt. I was having a conversation about it with a student of mine and she couldn’t believe that I’m not proud of my accomplishments. I don’t think I have the capacity to ever be content, because I can’t help but step outwards and see the total insignificance of what I do as a designer. I find design interesting and challenging, don’t get me wrong. I love what I do and I am so grateful and privileged to have a creative job I enjoy, but design as a tool or profession does not usually inspire that deeper sense of purpose or meaning inside of me.

However, helping people, connecting with people, examining what it means to be human, trying to grow and evolve and using the creative process as a catalyst for that; this has all given me a sense of purpose and meaning again. I’m not totally convinced of how much this project itself will accomplish outside of my own personal growth. However, I know personally it's given me much insight and planted seeds of inspiration for how I want to live moving forward. It feels like the beginning of something greater.

Tim and I have been preparing for step 12, when we are going to attempt to do something larger than ourselves. Can we actually use our tools as designers to start a larger dialogue now that we've gone through these steps confronting our own selfishness and apathy? Can design be used as a tool to advocate change? While I am often pessimistic, these last steps of kindness have shown me that it's often the small things that can make a big difference. At the very least, it never hurts to try. As I said before, all of life is an experiment.

We'd love for you to participate in this 12-step journey with us. Step eleven is about making strangers smile, in whatever way you can. Comment below or tag #12kindsofkindness on social media and let us know your stories. We'd love to hear them!